Now, I”m sure I’m not alone when I say that I have, for some time now, been engaging in pretty intense love/hate relationship with exercise. I’m very open minded to most things, from my (slightly more exotic) escapades like kayaking and horse-riding, to going through my fair share of gym memberships and running too. When news reached me of the newly established “Hot Yoga” studio in Sheffield set up by experienced yoga instructors Koreen and Anne Marie, needless to say I found myself intrigued. Granted at first the term hot yoga reminded me a little of something you’d maybe expect to overhear people discussing after cast members have been doing it during a reality TV programme, but regardless I thought I’d give it a go as the relaxation element of yoga really appeals to me. I had no idea what to expect, as I’ve had very limited experience with yoga so far- and by limited experience I mean good old YouTube videos… though they must count a little, right? 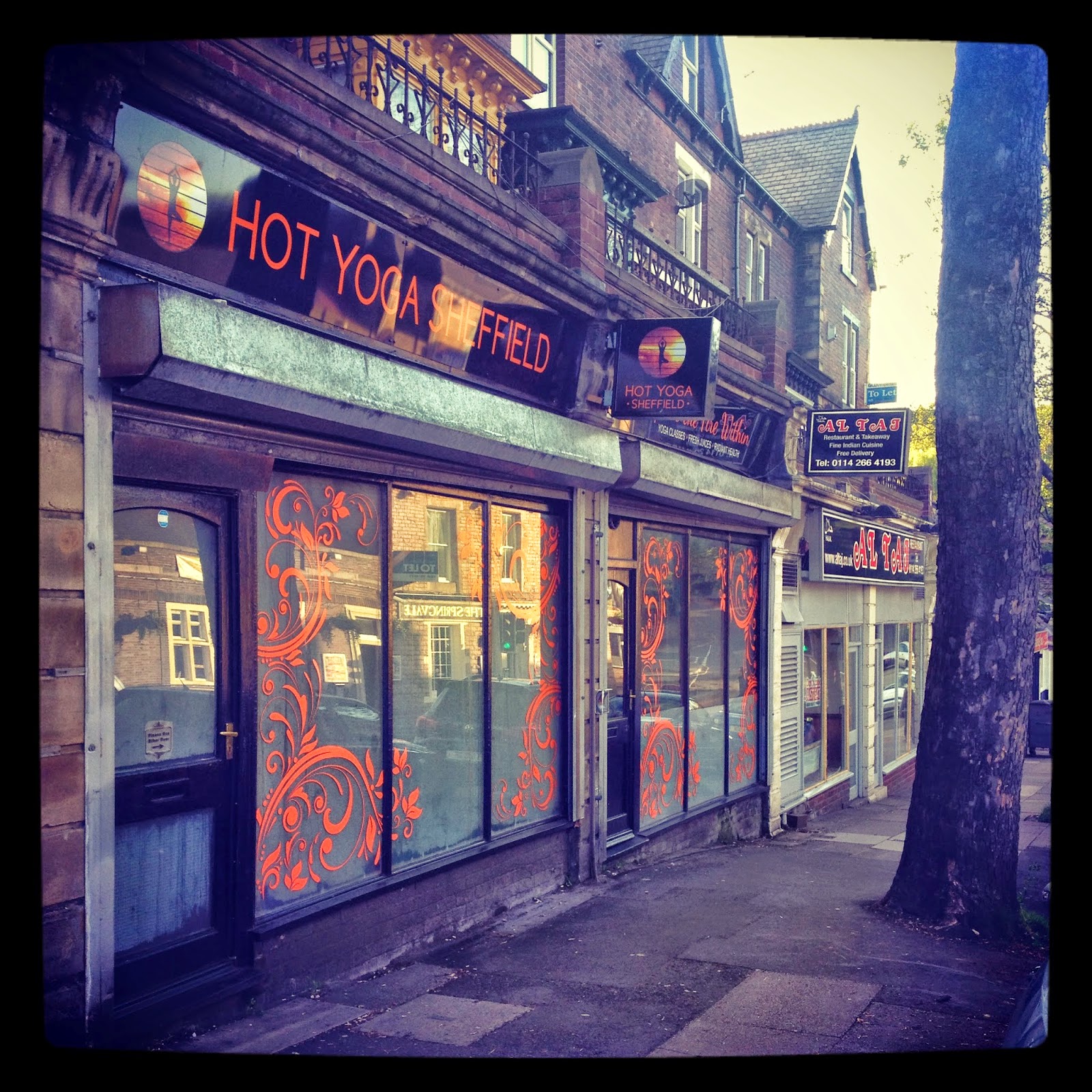 The studio location itself is not too far out of the way- It took me about 10 minutes drive from the city centre, past the beautiful Weston Park heading towards Walkley at 26-28 Commonside. It’s also easily accessible via the 95 bus route, which has a stop about 30 seconds away from the studio itself. Upon arriving (make sure you’re early as they lock the doors during classes) I was greeted by a wonderfully smiley and enthusiastic Anne Marie, who was taking my 75 minute Hot Yin class. There are five types of classes available; Hot Yoga, Hot Flow and Hot Yin. Hot yoga classes are accessible to all as even though they are not relaxation or meditative based, they focus on alignment and poses which beginners shouldn’t struggle with. The aptly named hot flow classes however are aimed at fitter, more experienced yoga practitioners as the pace is faster and more challenging. Hot yin classes are meditative based, less physically challenging and perfect for beginners.
Of the remaining two, karma classes are standard, regular classes which sometimes feature guest yoga instructors, and are available to the public for a minimum donation of £5 (normal classes range between £10-£12 but package deals are available). The funds raised from these classes are later invested into yoga outreach programmes in the wider community (love that!). Similarly family classes are run at a slightly cooler room temperature and and on the same minimum £5 per family donation principle.

The most accurate way I can think to describe walking into the studio is that you’re reminded of being in a sauna- it really is hot! Obviously I expected this due to the name, but for anyone who is not a fan of humidity or heat I would probably say that this isn’t the hobby for you!

My advice would be to bring a large bottle of water, a mat and towel (I managed to forget my towel and I don’t own a mat so I rented one of each from the studio for £2 in total) and to wear something as cool as possible- Ideally hair up for us ladies (always!), a loose fitting top, some cut off gym shorts, and studio etiquette requires no shoes or socks so need need to worry about those.

As for the class itself, I really enjoyed it. Considering it was 75 minutes long it didn’t feel like a long time, and the balance struck between relaxing floor and breathing exercises and more challenging stretches was just right in my opinion. I did sweat- a lot, but not in the same way that I would during a run, this again was more like a sauna induced sweat- you’re hot but not uncomfortable. The only criticism I would have is that even though the music throughout the class isn’t constant, some of the songs contained lyrics which I found detracted my attention away from the guidance Anne Marie was giving throughout the class… though arguably a minor negative in an otherwise positive experience.

I left the studio feeling considerably less achy than I had throughout that day due to over-exercising of late (Easter has taken its toll!), and considerably more relaxed than I was when I came. I think it’s getting increasingly difficult in our everyday lives to truly relax and switch off from the constant busyness we often inflict upon ourselves, and I for one am a perpetrator of exactly that. Though I enjoy being busy, I can’t even describe how refreshing it was to have as little as an hour and 15 minutes away from technology, thinking about work to be done and worrying about things that needn’t really be worried about… and I think it’s fair to say we’re all guilty of doing it!

To anyone on the fence about trying hot yoga, in my honest and unbiased view I’d say go for it- For me it was certainly a worthwhile experience, and even if you decide it’s not for you, as cliché as it sounds we only end up regretting the opportunities that we don’t take. For those wanting more information, have a look at their website at Hot Yoga Sheffield.

I myself think I’m going to go for hot yoga class next time… who knows, I might even see one of you there 😉

Until next time,
-The Sheffielder
x

You may also enjoy: