A couple of weeks ago me and some of my blogging pals headed down to Napoleons Casino on Ecclesall Road for a night of food & fun with both old, and some new friends too.

I was greeted and offered a drink (espresso martini, as always) which gave me a chance to mingle with everyone and their other halves/+1s, and meet some lovely new bloggers such as Girl Eats Sheffield (what a fab blog/name).

Whilst sat in the bar area we had a chance to look at their menu, which I’d sneaked a peek at prior to the event because, I’ll be honest, I basically spend 90% of my time thinking about food.

I think it’s fair assumption to say that, with chain casinos especially, you expect them to offer a nice “pub grub” style menu – good value, tasty food that does the job but isn’t exactly Silversmiths or The Milestone.

However with that being said, I was really impressed with Napoleon’s – both the menu and the food itself. 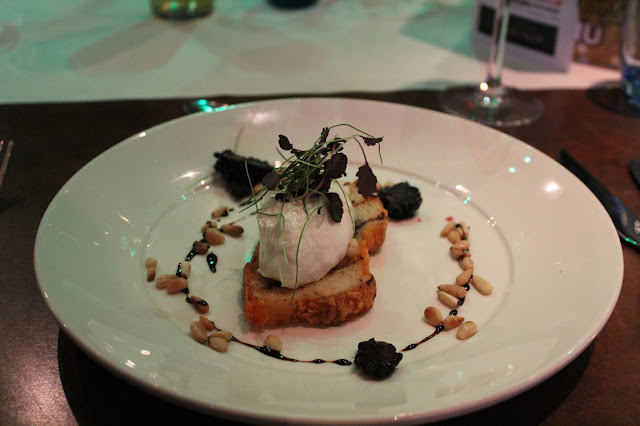 I had goat’s cheese curd on toast with roast pine nuts and blackberries to start. As you’d imagine with goats cheese “curd” the consistency is not that of normal goats cheese, it’s more of a thick cream. The only improvement, for me, would be that the curd and the bread both be made warm as the toast was warm, but the curd quite cool. All in all however, it was a really nice starter and one I’d definitely go for again. 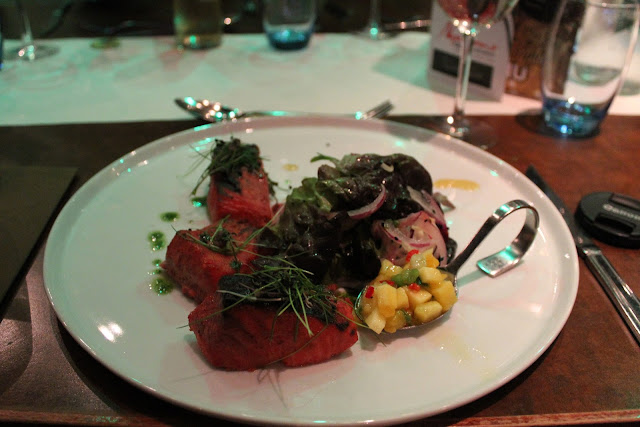 Then for my main I had tandoori spiced salmon, red onion and seed salad with naan bread croutons and mango salsa (a starter dish, but they can all be made as a main). I’m not normally a fan of salmon as I find it quite bland, but I absolutely love tandoori salmon.

The dish was presented beautifully and really tasty. My only comment would be that the naan bread croutons are really tiny (possibly as it’s a starter served in a larger portion as main) and therefore they don’t really substitute the carbohydrate element that would usually “fill you up” in a main dish. Luckily we had some lovely veg and chips for the table on the side, so all was well anyhow!

Also the red onion and seed salad was made with raw red onion, which myself and some of the other diners commented was quite difficult to eat. The fish however was marinated and spiced to perfection – it was a really pleasing dish overall. 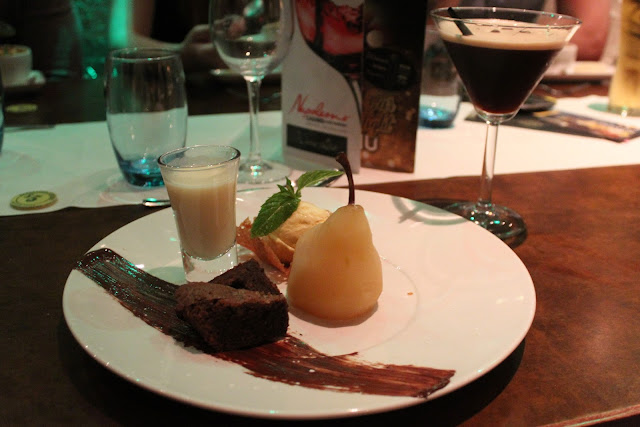 As I’m sure you’ll all know by now, I love a good chocolate dessert and even though I was tempted by the salted caramel creme brulee I went for my first choice.

To be honest, even though the pear is listed first I did expect the brownie to be the “main part” of the dessert, so to speak! The pear was nice, but did seem a little odd in the context of the other elements (which were suitably delicious, as per the rest of the meal).

All in all I had a really great evening, as I was thoroughly impressed with how well we were looked after by the staff & manager – nothing was too much trouble for them. We were absolutely inundated with great food, drinks and entertainment in the form of free chips to play with downstairs – what more can a girl ask for on a Thursday night, eh?

The deal we had was the dine in package which, if we’d have been paying would be £23 for three courses, a drink on arrival and a £5 gaming chip which is think is fantastic value for the quality of food and service.

A few of the group even won some money with their £5 chips. I however won every single time in the practice run and then lost it straight away when we played for real. Doh.

So to conclude, if you’re in the mood for somewhere a bit more entertaining than your average restaurant that serves with great food to match, I’d say Napoleon’s is the place to be.

*I was kindly gifted with a three course meal and drinks by Napoleon’s Casino Sheffield for the purpose of review. All views are, as always, my own.