I probably haven’t mentioned it amidst my Sheffield based ramblings, but I am a huuuge fan of chocolate. It’s an unashamed adoration… bars, buttons, brownies. So when a fabulous Sheffied based independent manufacturer of the latter, Boxed Brownies contacted me to review one of their brownie boxes* I jumped at the opportunity to get my teeth into some delicious chocolatey goodness.

Let’s just say, before I’d even tried the brownies I was sold by the branding. Beautiful little proudly made in Sheffield stickers adorned the parcel, as well as grease proof paper with the names of all manner of things that make Sheffield great… Henderson’s relish, the Lyceum and Jessica Ellis to name just a few.

Now, what I assumed to be a box of ordinary brownies, was actually a diverse array of different flavors. The range went from bonfire toffee and toasted marshmallow, cranberry and pistachio, to cardamon and ginger and stollen- and that’s not the end of it. There was also amaretto and rosemary and salted caramel and cashew, which I have to say, in order, were hands down my first and second favorites of the bunch. You can also order classic dark chocolate, or milk chocolate brownies from their website, here. 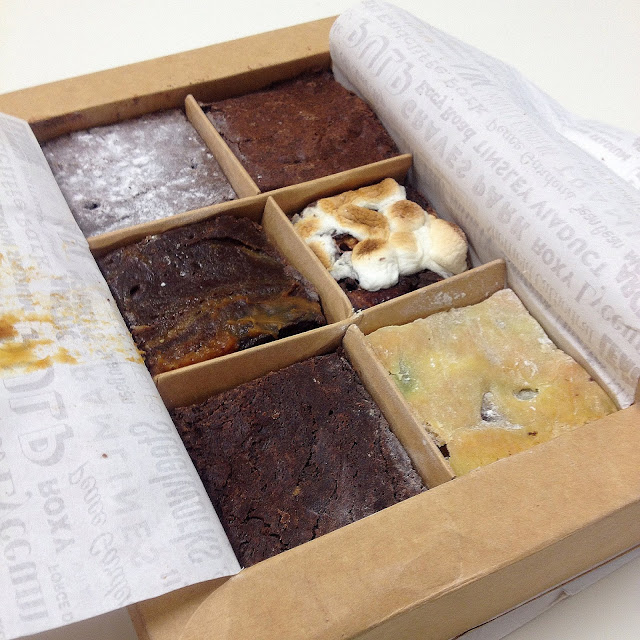 Let me just say… these are far from your average brownies. Each and every one of them was like utter magic- I felt like a kid in a candy store on the first bite trying to work out the flavor (I did share them out at work though, as tempting as it was I’m not quite that greedy!).

I received a lovely press release from the makers Clive and Hayley that told me the original dark chocolate brownie recipe is Clive’s signature bake. He even beat 7,000 British Bake Off contestants to make the final 50 in 2010, and they since launched the business in June this year, from a little cottage kitchen in Sheffield.

From Sheffield, to Sheffield- that’s what we like, hey!

So, in the spirit of goodwill I have an exclusive discount code for you readers. If a box of chocolatey goodness is right up yours or a loved ones street, you can get 20% off Boxed Brownie boxes with the code CHRISTMAS. Just be sure to order before December 17th.

You can view the full range available from Boxed Brownies on their website here (Warning: if you love chocolate and ridiculously cute pugs, look away now).

But until next time, you’ll find me in the gym 😉
H x

* I was supplied a mixed box of brownies from Boxed Brownies for the purpose of my review. All comments and opinions stated are my own.